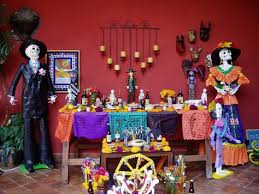 In preparation for Dia de los Muertos, 2 november, I thought I would bring my readers the opening scene of the novel LOVE POTION.

The Estrada family filed into dinner into what they called the “big dining room” and seldom put into service. Don Plutarco, patriarch and undisputed monarch of the family, was already in place. He stood ceremoniously behind the massive chair at the head of the table. Olga, the servant girl, a timid little titmouse pale as a bowl of oatmeal, handed Don Plutarco a dusty bottle of Burgundy.
The master of the house curled his upper lip like a Doberman with some serious rage- control issues. “I said white,” he hissed. Don Plutarco Estrada was not accustomed to being contradicted by anyone, much less a servant girl.
The oatmeal face flushed red, the little mouse squeaked in a tiny voice. “But Señora Paloma always prefers Burg__” The Doberman quickly crimped his lips to restrain speech and accepted the bottle.
The refectory was a cold and cavernous chamber, heavy with familial cobwebs left behind by four preceding generations. The room held perennial smells of aromatic woods, heavy carpet and musty ancestors. Delicate gilt chairs covered in a fine brocade encircled the massive table like a garland of Damson plums. The ostentatious chandelier would not have been out of place in the National Opera House. Tiny flame-shaped bulbs and prisms dangling like diamond earrings flickered over the white damask cloth. Sulking at one on of the room stood a temperamental walk-in fireplace that could acomodate a California Redwood. The roaring fire made a valiant albeit vain effort to warm the room. On the massive sideboard candle flames wiggled, reflecting little sparks in the gold foil of the gifts for Mamá Paloma.
Don Plutarco, who lived in a romantic Mexico of the past, held his pose until everyone was seated. On his left was his mother, Mamá Paloma’s customary place, followed by his older daughter Carmela and her husband Victor. On his right were his wife Marta, and their youngest daughter, twenty-two year-old Paloma, named after her grandmother.
Grandmother Paloma did not care a feather if it was right or wrong. She liked Burgundy with her meals with total disregard for what was being served. And Burgundy she would have! Don Plutarco would have preferred a fine Sauvignon Blanc, but out of respect for his old mother’s whims, he popped the cork of the Burgundy with extravagant ceremony. Her attentive son filled her glass with a flourish. “I get the first waltz.” He always said this when he poured wine for his mother. It was a standard part of the annual dinner that never varied. He worked his way around the table.
From the large tureen Doña Marta served Mamá Paloma first, heaping her plate with her favorite dish, paella a la Barcelona. “I hope it turned out as good as yours.” This was Doña Marta’s usual disclaimer whenever she got up the courage to make paella for her mother-in-law. Everyone passed their dinner plate, lavender blue with a graceful paloma outlined in gold, and Doña Marta ladled out steaming paella. Don Plutarco raised his glass. “To our venerable Mamá Paloma with all our love!”
“To grandmother! Con todo cariño,” everyone answered.
Mamá Paloma did not acknowledge the tribute her family offered with so much love. Her glass of imperative Burgundy remained full, the fragrant paella steamed deliciously on her plate untouched. Grandmother sat stiff and prim, her back perfectly straight, her bony hands resting on the table. She wore an elaborate dress, an exquisite Jacquard in dark purple with swirls of turquoise and gold saved for special occasions and today was her day. From under a black mantilla of hand-made bobbin lace her white skull grinned pleasantly at all the family gathered around the table. The empty black eye sockets gave Mamá Paloma an expression of amusement. Grandmother Paloma was dead. She’d died six years ago at sixty-nine. Only her spirit occupied her chair this evening. Today was the second of November, Dia de los Muertos. The full skeleton, crafted of paper maché was brought down from the attic every year, dressed for the occasion, and returned to the attic until next year as though it were a Christmas tree. Mamá Paloma’s place was decorated with pungent ropes of the traditional orange marigolds, her favorite strand of pearls draped over a paper maché skull.
Paloma went to the sideboard and came back with pan de muerto, a round sweet bread in various tones of brown, beige and tan. An egg varnish gave the loaf the appearance of glazed pottery. The “bones” described with white icing divided the loaf into six equal segments. Paloma cut Grandmother’s wedge first and put it on her bread plate, suffusing the entire room with the rich aroma of vanilla.
Carmela couldn’t wait to dip her fork into the paella. She watched Victor lower the level of his tumbler of brandy her father had put in his hands earlier. It was his third, she observed, Carmela was counting but she wasn’t complaining. She at least knew where he was, he had on his party manners, and it was a night out just the two of them. The two monsters were safely in their cage at home with Cristi the nursemaid. Carmela had plans for him when they got home tonight.
Everyone ate with appetite. Dinner chatter began at once. The Day of the Dead was not a wake, but a celebration of life. The meal was gay and convivial. Paloma always felt closer to her grandmother on the second of November. Mamá Paloma would have had them all spellbound by now had she really been there. The old matriarch lived in her own reality among the spirits of the Other World, the unexplained, and thus a fund of fantastic stories about ghosts, witchcraft, magic spells, charms and secret potions. She was on intimate terms with the few remaining Kumiai descendants who still live in the deep folds of Kuchumá among the departed spirits of their ancestors.